Races, tracks, drivers and all the drama that comes along with it
Post Reply
22 posts

Brian France -- the CEO and Chairman of NASCAR -- was arrested for DUI on Sunday evening in The Hamptons and cops say he was also in possession of oxycodone .. TMZ Sports has learned.

The 56-year-old -- one of the most powerful people in professional sports -- was initially stopped in Sag Harbor, NY while driving a 2017 Lexus. Cops say he blew through a stop sign at 7:30 PM.

During the stop, we're told officers suspected France was intoxicated and conducted a field sobriety test ... which France bombed.

We're told France's blood alcohol level was more than TWICE the legal limit. Cops say during the stop, they found oxycodone pills during a search of his person.

France was arrested and hauled to a nearby station where he was booked for DUI and criminal possession of a controlled substance in the 7th degree. France spent the night in jail and was released Monday morning after his arraignment.

And sources tell us ... during the process, France was name-dropping all of the powerful people he knew and even mentioned his relationship with President Donald Trump.

The France family is racing royalty -- Brian's grandfather Bill France Sr. (aka Big Bill) founded NASCAR back in 1948 and ran the organization. Brian's father took over the role from 1972 to 2000.

Sag Harbor is one of the most exclusive communities in the Hamptons -- where stars like Billy Joel have homes.

And, as one local puts it, "It's so stupid to drive drunk in the Hamptons. They have police checkpoints everywhere and police are always looking for drunk drivers." 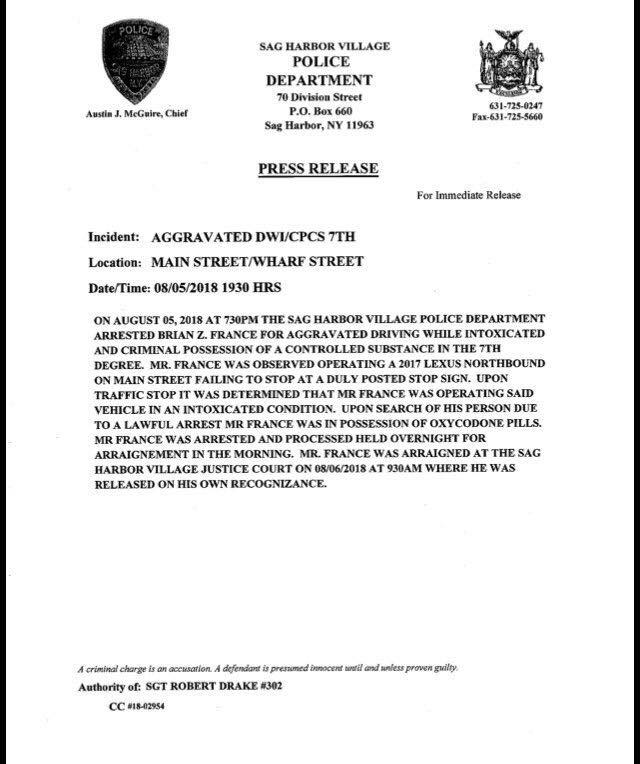 man cannot live by bread alone...He must have beer and Beer Never Broke My

What happened: NASCAR chairman and CEO Brian France was jailed overnight after police in Sag Harbor, N.Y. pulled him over and arrested him for aggravated driving while intoxicated and criminal possession of a controlled substance (oxycodone pills), according to a press release from the Sag Harbor Village Police Department. The news was first reported by TMZ and more details are available there through TMZ’s sources.

What it means: Two hours after Chase Elliott crossed the finish line at Watkins Glen, giving NASCAR a massive boost of much-needed positive momentum, NASCAR’s leader was getting arrested for DWI and criminal oxycodone possession in the Hamptons. As if France hasn’t done enough damage to NASCAR during his time in charge, this is a major black eye for the sport.

Instead of a feel-good, racing-related storyline that seemed to give NASCAR momentum on Sunday, all the talk nationally will be about France’s arrest. Additionally, this comes while NASCAR is up for sale — so having the chairman and CEO conduct himself this way only serves to devalue the sport. France has been at the helm since 2003, a 15-year stretch in which he has made highly questionable decisions and statements, oversaw a sharp decline in his company’s fortunes and acted oddly during his all-too-rare public appearances.

France has no ownership stake in NASCAR and serves at the pleasure of his uncle, Jim France, and sister, Lesa France Kennedy. Perhaps this is the catalyst in having Brian France step aside for someone who is more engaged and capable of guiding the biggest racing series in the United States through turbulent times.

News value (scale of 1-10): Ten. Despite his lack of presence at the races and having other executives run the sport on a day-to-day basis, France is still the chairman and CEO of NASCAR — a sport with a strict drug-testing policy and public “Road to Recovery” procedure. Whether or not this is an isolated incident or a symptom of larger substance abuse issues, let’s hope France follows the example set by drivers and crew members and takes the time he needs to avoid such situations in the future.

Three questions: Is there further embarrassment to come from this situation, such as a video of the arrest or mug shot? If this incident doesn’t result in France leaving his role as head of NASCAR, what would? Given France’s close friendship with President Trump (whose name France dropped during the arrest, per TMZ), could he simply be pardoned for any charges that result from this?

From NASCAR: “We are aware of an incident that occurred last night and are in the process of gathering information. We take this as a serious matter and will issue a statement after we have all of the facts.” 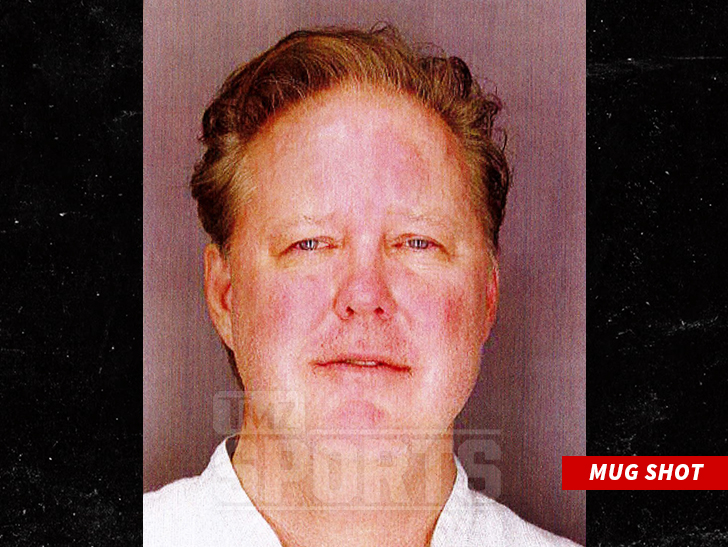 AND THEY WONDER WHY NASCAR IS SO SCREWED UP.....THEY ALL KNEW....
IT IS COMMON KNOWLEDGE AROUND HERE .....BEST THING THAT COULD HAVE HAPPENED TO NASCAR AND OUR COMMUNITY IS TO GET HIM OFF THE STREETS BEFORE HE KILLED SOMEONE....
Last edited by Annalee on Mon Aug 06, 2018 5:17 pm, edited 2 times in total.

Remember back in the Spring, he was conspicuously absent for 3 or more months? Methinks rehab. Sometimes, rehab doesn't work the first time. The opiod epidemic continues....
This Town Needs An Enema - The Joker .

I guess I blame his family...They knew, the whole NASCAR family knew ......Alcoholism and drug addiction are diseases, but I have also had two very good friends, high school sweethearts killed by a drunk driver three weeks before their wedding ....more than anything, what bothered me most was his arrogance....Trust me the New York police didn't care who he was and we should thank them.....No one was killed and at least now he can get help......

I wonder if they were in a tiny zip-loc or a script bottle. This may have been his cry for help...
This Town Needs An Enema - The Joker .