Races, tracks, drivers and all the drama that comes along with it
Post Reply
84 posts

As much as I would love to see Tony race Indy....this is something I fear for him...prayers for Robbie Wickens
And James Hinchcliffe

Robert Wickens being treated for injuries to spine, arm after airborne crash at Pocono

IndyCar driver Robert Wickens was hospitalized and is being treated for injuries to his lower extremities, right arm and spine after his car went soaring into the fence at Pocono Raceway in a scary wreck on the seventh lap Sunday afternoon.

IndyCar said Wickens also suffered a pulmonary contusion. Wickens will have an MRI and will likely undergo surgery at Lehigh Valley Hospital-Cedar Crest in Allentown, Pennsylvania, according to the sanctioning body.

Medical workers attended to Wickens, who was awake and alert, before transporting him to the hospital via helicopter.

Only eight laps had been completed in the 500-mile race before the race was stopped. It was resumed after a delay of nearly two hours while workers repaired a section of fencing that was damaged by Wickens' car.


Alexander Rossi won the race, but his thoughts were with Wickens.

"It's tough to really celebrate after what happened," Rossi said.

James Hinchcliffe, Takuma Sato and Pietro Fittipaldi were also involved in the wreck.

Hinchcliffe seemed to be in pain, grabbing his wrists as he slowly left his car. He was cleared from the medical center but declined to discuss the crash out of respect for Wickens, his teammate at Schmidt Peterson Motorsports.

Fittipaldi, who broke both of his legs in a May crash while driving in a World Endurance Championship event, tweeted that he was thankful to walk away from the crash.

The race was red flagged, and drivers were allowed out of their cars while the fencing was repaired.

Pocono Raceway president Ben May said about 80 feet of fence and a few posts were damaged in the wreck, saying, "It may not be the prettiest job, but it's going to be safe."

But Bourdais, who said the repairs were "pretty lousy" raised his concerns about the quality of the repairs and condition of the fence before he got back in the car.

Graham Rahal also addressed the crash in a tweet during the delay.

It was the second crash of the race, as Rahal wrecked Spencer Pigot while the green flag flew on Lap 1. Rahal was hit with a drive-through penalty on the restart for avoidable contact.

Wickens had reeled off five straight top-five finishes entering Pocono and matched a career-best finish of second in the previous race at Mid-Ohio.

They repaired that fence with chicken coop wire, what were they thinking

....Why Indy officials let them race with that repair is absolutely wrong.....Two years ago they had a serious fatality there....same spot....That type of fencing just tears up every piece of security on the car....All that is left is the cocoon to go airborne, flip multiple times.....I just don't know how anyone can race without more safety around the drivers.....AND CHICKEN WIRE.....PLEASE...WHATS WRONG WITH THIS PICTURE...HOW MANY DRIVERS HAVE TO DIE BEFORE THEY DO SOMETHING....My Dad lost his best friend Bill Vukovich many years ago at the Indy 500 because of safety issues....They haven't progressed very far from there....Just very sad....

Chain link fencing acts like a cheese grater when a car gets into it. 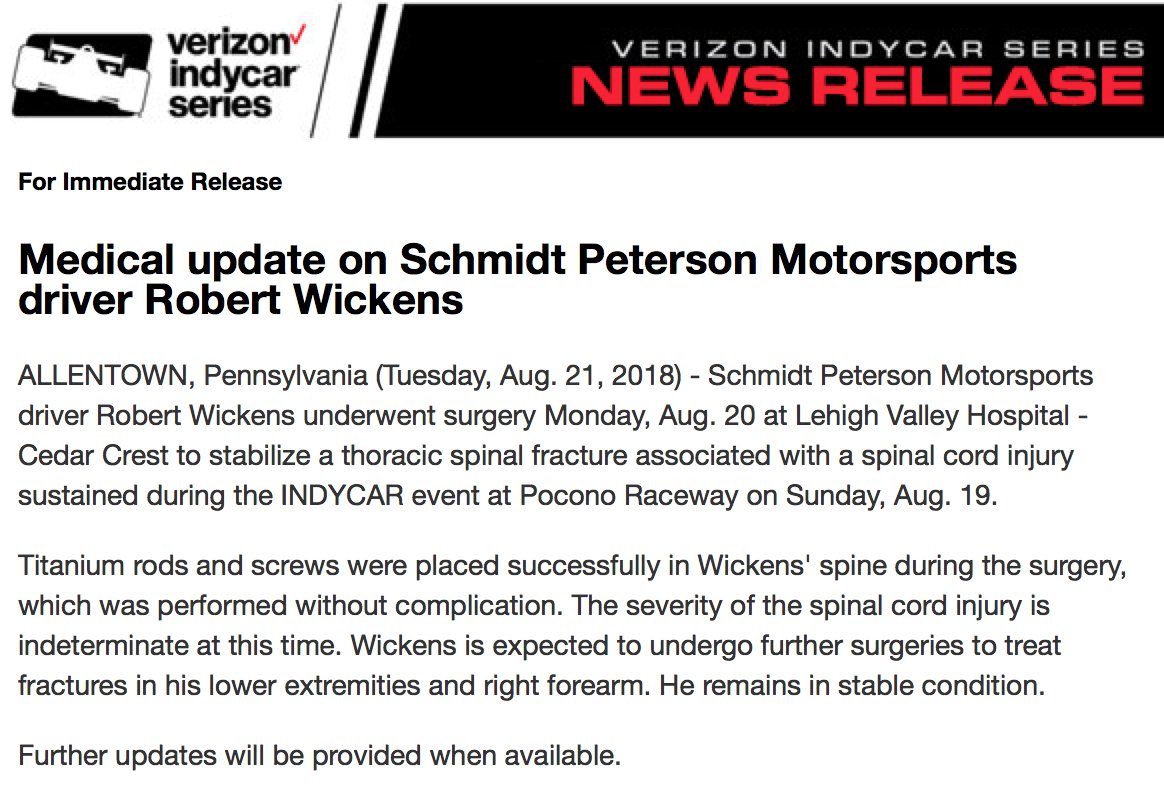 Oh yeah, we got some window screens and chicken wire! This'll be fixed in a jiffy!
This Town Needs An Enema - The Joker .

I'm glad Wickens is alive and I hope he can return to racing at a competitive level. All tracks need to have fencing and supplies on hand in case of incidents like this....Even more saftey barriers as needed.
This Town Needs An Enema - The Joker .

Has anyone heard any more on Wickens?
Top

I heard Thursday that he had surgery to install rods, screws and plates to his spine. He also had injuries to his lower extremities and one of his wrists. I pray to see this young man back up to speed again.
This Town Needs An Enema - The Joker .