Races, tracks, drivers and all the drama that comes along with it
Post Reply
3 posts • Page 1 of 1

First, there was Johnny Sauter:

Ross Chastain wins the race, but then is disqualified:

Re: Iowa Truck Race Sunday Was Full Of Excitment

Sauter was involved in an on-track altercation with driver Austin Hill that resulted in NASCAR race control parking him for the remainder of Sunday’s M&M’s 200. Competition officials reported Tuesday that the suspension would not impact Sauter’s postseason eligibility.

“We look back at the history of everything we’ve done and try to react with the precedents that we’ve set and then obviously tailoring those to the situation that we have at hand,” said Scott Miller, NASCAR senior vice president of competition. “In this case, we felt like his actions certainly warranted being sat down for an event, but it felt a little too harsh to take him straight out of the championship, so we think we landed on what we feel is fair and a deterrent.”

The penalty will sideline Sauter for this Saturday’s event at World Wide Technology Raceway at Gateway in Madison, Illinois. A decision regarding a possible appeal and its potential timing were not immediately announced.

Trucks driven by Hill and Sauter initially made contact early in the final stage of the race, triggering a retaliatory bump from Hill’s Hattori Racing Enterprises No. 16 Toyota. That contact sent Sauter’s ThorSport Racing No. 13 Ford careening into the outside retaining wall, prompting the last of four yellow flags at the .875-mile track.

During the caution period, Sauter meted out payback with a prolonged ramming of Hill’s truck, carrying both vehicles into the wall. NASCAR officials ordered Sauter off the track, ending his day after 137 of the race’s 200 laps.

“We tend to look at incidents under caution as more of a retaliatory thing,” Miller said. “Obviously, him driving half a track with a smoking truck and winding through a few cars to get to the 16 and then running over him, then bouncing off the wall and running into his door, it was pretty aggressive. It was definitely not anything that could in any way, shape or form be defended as a racing incident.”

Miller said competition officials considered sanctions against Hill for the intent of his bump that sparked Sauter’s flare-up.

“We did talk about that,” Miller said, “and while we haven’t typically reacted in the form of a penalty to those things, there will certainly be further discussions with the driver of the 16 and he will definitely be placed under a little bit more of a microscope as far as us watching his actions on the race track.”

Sauter was scored 27th in the final rundown, while Hill righted his damaged truck to place 12th in the 32-truck field. Both drivers were summoned to the NASCAR officials’ hauler after Sunday’s race for consultation, something Miller said would likely happen again to prevent further escalation of their rivalry.

“Those conversations will take place again before they are placed on the race track again together,” Miller said, “and there will be a pretty good understanding that we don’t want to see any more contact or aggressive behavior out of either one of them — toward each other or other competitors.”

Sauter ranks eighth in the Gander Trucks driver standings. His victory May 3 at Dover International Speedway virtually clinched a berth in the series’ postseason field, which will consist of eight drivers.

Hill sits seventh in the Gander Outdoors Truck Series standings, just eight points ahead of Sauter. Hill opened his second full-time campaign in the Gander Trucks ranks with a victory in the season-opening event at Daytona International Speedway.

Re: Iowa Truck Race Sunday Was Full Of Excitment 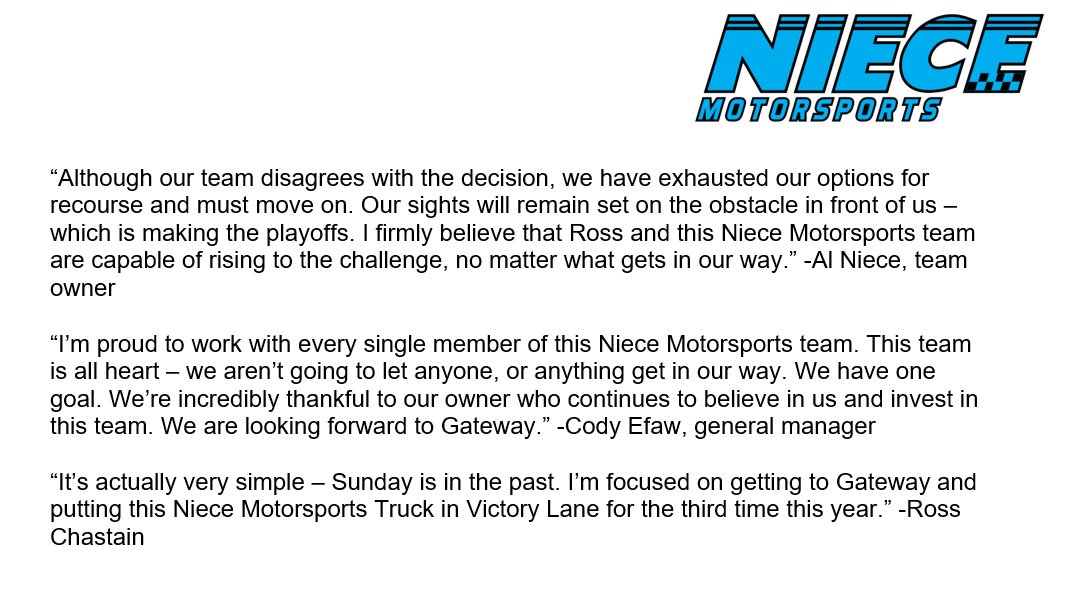