Races, tracks, drivers and all the drama that comes along with it
Post Reply
1 post • Page 1 of 1 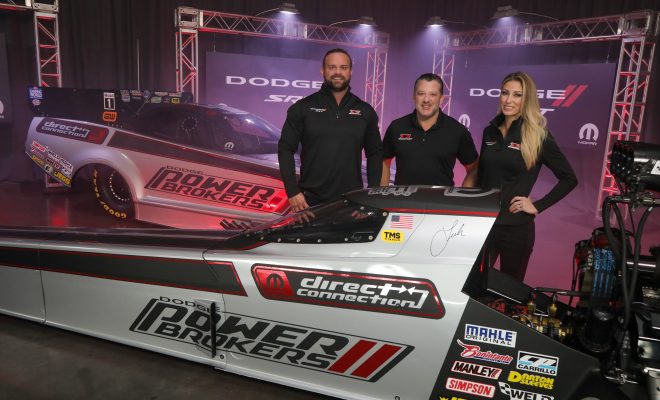 I’m really pleased to have Dodge//SRT and Mopar as partners with our new NHRA venture as manufacturer and sponsor for our two entries in Top Fuel and Funny Car with Leah and Matt,” says Tony Stewart, TSR team owner. “It shows confidence in your program when an OEM wants to be on your team and for you to help support their program as well. They have obviously had a great relationship with both drivers for the last few years and to be able to continue that association is key to this team’s success and a huge benefit to the continuity for everyone involved. Having that kind of history definitely helps flatten the learning curve while raising expectations for our inaugural NHRA season. It’ll be nice to work with Dodge and Mopar again after sharing success together in USAC and the World of Outlaws nearly two decades ago. We are certainly setting the bar high and look forward to being competitive from the start.”

TSR was formed in November 2000. Since its inaugural season in 2001, TSR has earned 27 owner championships – 14 in USAC, nine in the World of Outlaws (WoO) Sprint Car Series, and four in the All Star Circuit of Champions TQ Midgets. TSR will embark upon its first NHRA campaign in 2022 while simultaneously running its sprint car program for a 22nd straight season. TSR’s NHRA and sprint car entries will operate out of its existing 25,000-square-foot facility in Brownsburg, Indiana.

Pruett’s and Hagan’s nitro-fueled drag cars will have primary branding throughout the season that spotlights the recently announced Dodge Power Brokers and Direct Connection programs.

Pruett first joined forces with Dodge//SRT and Mopar in 2016 and has consistently competed among the top contenders in each of the last five seasons. The 33-year-old Redlands, California, native has nine Top Fuel national event victories, nine runner-up finishes, 12 No. 1 qualifier honors in 172 races, a career best elapsed time run of 3.631 seconds and a best speed of 334.15 miles per hour. She will drive the Dodge Power Brokers Top Fuel dragster this year.

“It was very important to me to continue the close relationship I’ve had with Dodge//SRT and Mopar in this new journey with Tony Stewart Racing,” says Pruett. “I’m appreciative of the support that Dodge and Mopar, and all their fans, have shown me these past few years and I’m proud to fly their colors as we move forward together and work to bring home wins and a championship in 2022. Having Direct Connection branding on my dragster this season is really exciting because it has such a rich history of success at the drag strip with racers like Don Garlits, and it’s amazing to help continue to build on that legacy and introduce it to a new generation of Dodge enthusiasts.”

In addition to carrying on the legacy of drag-racing innovator and multi-time champion Garlits, representing Direct Connection has personal meaning to Pruett.

“While Dodge//SRT was developing the new Drag Pak, we were also testing and developing some of the stage kits,” Pruett said. “It seemed almost unbelievable that an OEM would make available various stage kits capable of adding so much additional power, all while maintaining the car’s warranty. To be on the presenting side of a massive program that I contributed to, while watching it progress in pure secrecy, makes me incredibly proud to run Direct Connection and Power Brokers on my Top Fuel dragster.”